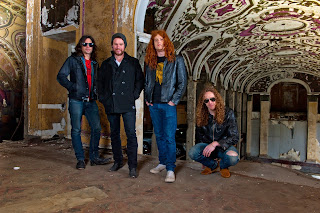 I had been looking for the perfect band to begin my blogging and last night I was given that opportunity. My friend decided to take me to see Slash at Harrah’s Stir Concert Cove last night to “kick things off” so to speak and although my dream would have been to interview the “man in the top-hat who plays a mean Les Paul” I was not at all disappointed to find myself standing in front of four amazingly talented musicians who go by the name of Taddy Porter.  These southern rockers from Oklahoma started the night off with a hard driving drum beat along with a smooth bluesy bass that makes the phrase “keeping up with the Joneses” no longer a metaphor to be taken lightly. Doug and Kevin Jones (brothers by blood, band mates by choice) had the ability to help everyone keep time with the music whether it be a tapping of the foot, hand against the beer can or a full on head bang, imitating the fire red haired bassist, Kevin. Andy Brewer lead singer and guitarist of the band at a glance had a typical rock star persona. Standing at least 6’1”, slightly underweight, long curly blonde locks, and sporting a rugged goatee. However, LSD (lead singer disease) typical he was not.  Andy had an approachable, down to earth attitude that I actually felt invited to become a fan. His voice did not have that alternative gruff sound, but more of a tone that could be described as a scolding. A good ole’ fashioned classic rocker with a young fresh twist is how it felt when I heard Andy belt out “Shake Me” and “Mean Bitch”. Joe Selby with his natural good looks and a hint of a Jim Morrison air about him, he was refreshingly confident without being cocky. His guitar told his story without a need to open his mouth.  Joe is definitely an accomplished musician who doesn’t mind displaying that accomplishment to the audience. Sharing with them a desire to be drawn in and blown away at the very same time. At the end of this respectfully brief performance by Taddy Porter, I was amazed at my need to hear more of them and dare I say it, less of the main attraction.  Don’t get me wrong Readers, Slash was as usual, his phenomenal guitar-god-like self, but it was as if I discovered talent in its rare form with Taddy Porter and had to have more. So as I worked my way towards the souvenirs booth to get a copy of Taddy Porter’s just released self titled CD. I decided that I would ask the question I had chosen to ask Slash if I had gotten my one in a million opportunity. These down home boys were there, meeting and greeting their fans, signing their memorabilia, respectful and awed to the fact they had just shared a stage with the infamous Slash. All I could think about was “how in the hell am I going to find my voice?” I counted the change in my pocket and realized I was a dollar short to buy the CD.  A day late, and a dollar short was NOT how I wanted to let my passion begin. I ran to my friends and demanded a dollar and was promptly provided with a scrunched up Washington that would be my saving grace and my voice. Shaking a little as I approached the booth, I was unsure if I could go through with an introduction as well as remember to use my writing name. I leaned in and saw that warm invitational look of Andy’s and began to speak, “Hi, my name is Penny and I am a rock and roll journalist who has started a blog site for local Omaha bands. Can I ask you a question?” Without hesitation Andy looked me in the eye, shook my hand and said “sure.”  My voice cracked a little and my throat became dry as I stumbled on my words, “If you could bring one famous musician back from the dead and jam with them for ten minutes, who would it be?” Andy turned to his musical comrades and repeated my question as he opened my CD to be signed. The guys were intrigued, I had peaked their interest. Doug Jones, the drummer with the driving beat, was first to answer with a resounding “John Bonham.” I smiled and nodded in agreement. The attention turned toward the head banging bass player Kevin Jones, “John Lennon” he said. At this point I kept my professional journalistic mouth quiet as I wanted to shout out “ME TOO” but remembering that I need to stay partial and unbiased to be a good writer. Then the eyes were on Joe Selby, who thought intently for a moment before making eye contact with Andy and said “Jim Morrison” at which he shrugged his shoulders slightly. Smiling at him thoughtfully, I realized he was probably the poet of the band.