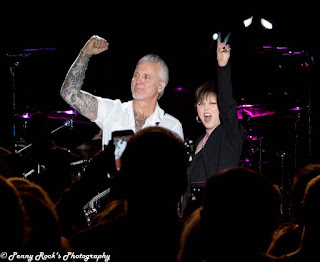 The amount of women artists in rock music today is almost equal too the men. Girls have more choice in who their music idols are now. Back in the earlier days of the 60s and 70’s hard rockin’ ladies were fewer and farther between. I bet you can name a few of the female rockers you know paved the way for the latest generation, and you know who will pave tomorrow’s generation, too.  Now, I am no musician unless of course you count my hairbrush days. (I’ll explain in a moment) Most of my favorite rock stars are men, but the women of rock are who made me strong. There was nothing like coming home after school, pissed off at someone (usually guys) and throw on Heart, Stevie Nicks or Blondie, sometimes all of them in the same hour. However, none could compare to the countless times the album, Crimes of Passion by Pat Benatar, hit the turntable. Pat Benatar’s songs were always the best when it came to telling an ex-whatever, to f**k off and in the privacy of my own bedroom. Even better than that, I could sing it; I could yell it, and the confrontation was all one sided. My side. Pat Benatar was my courage. I would grab my microphone (hairbrush) and sing out the anger and frustrations. Thank god I was alone all of those times.  Several times, Pat Benatar has come to the Omaha, Ne area, and every time I had missed her. Finally, my opportunity came on 8/4/17 at the Stir Cove in Council Bluffs. Ia. I received permission to photograph and review her show with special guest Night Ranger. Pat Benatar and Neal Giraldo were prepared to storm the stage at 9:30pm. Before they did, there was a small video of old pictures and a vocal biography of how the two met, fell in love and how they became a music dynamic duo.  Pat Benatar began the night off with the song “All Fired Up” and stunned me, silent. Her voice has not changed one note. Benatar performed every song as if she were singing it straight off the album itself. I kept thinking “she has to be conditioning her voice all the time” and when I did the research, she does, in fact, do that.  As the night went on she referenced her life and career over the years, mostly her life with Neal, how certain songs came to be written and their meanings. “Promises In The Dark” she explained, was about the beginning of their love affair. During the performance she would kiss him on the mouth or cheek or sometimes just rest her hand on his chest. There were no doubts of their 38 years of affection for one another.  The Stir Cove was jam packed. I had never seen it quite that full, with barely a bit of grass to stand on. Pat Benatar and Neal Giraldo referenced their oldest daughter, Haley Giraldo, a famous artist/actress in her own right, and her recent wedding nuptials. Neal Giraldo tells how when Haley was born, he wrote a song titled “Run Between The Raindrops” A sweet melody both her, and Pat sang together.  Songs were sung with, and without the other band mates but most songs had recorded sound effects, including “Love Is A Battlefield", Pat Benatar tapped a pedal with her foot and the beginning of the song would start. Neal blended in with his guitar, and as they say, “the crowd goes wild.”  As they said goodnight, the cheering audience was nothing but astounding. I was so pleased to have finally seen her perform. She was just as tough as I imagined her to be and shouting a tough song to some lover that had scorned her. When she started her last song of the night, the song she said, “started it all” and my personal favorite, “Heartbreaker.” This is my “hairbrush” song. As memories came flooding back about those moments of frustration as a teenager. The moments of throwing my backpack on the bed, grabbing a hairbrush (microphone, in case you air guitar guys didn't get that reference) and singing my lungs out. Sometimes so loud I couldn’t hear Pat’s singing anymore, but I still knew every word and never missed a beat. Some girls will know about hairbrush singing and well some of you might not, and that’s okay. However, I do recommend trying it. You might have your own music, your own song you listen too, to get this kind of aggravation out. If you don’t, I recommend most highly, Pat Benatar. Vinyl, cassette, Youtube or download and just pick a song, as most of them are perfect for it.     Posted 14th August 2017 by Penny Pepperstein