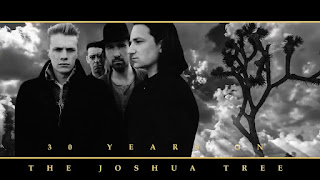 Part 1. Thirty years ago, I bought my very first CD, ever. I was still obsessed with vinyl records and cassette tapes but when my mom bought me a CD player for getting good grades and just for being the awesomeness that is me, (half to brag a little).  I began the incline of building my CD collection but not until after I listened to The Joshua Tree pretty much 24 hours a day except in school and even that was up for debate, until I could allow myself to buy another CD.

I knew every song, every word and would hum every melody in between the words. Bono’s voice was like a serenade. His voice would start in a tenor only to rise to a falsetto for emphasis, the song With Or Without You (1987 “Joshua Tree”) is the perfect example of what I mean. The Edge played a kind of shimmering guitar riff that would be the signature of most of the songs from the album. The Joshua Tree was U2’s fifth studio album and up until then; I recognized and liked some of U2 music but never really considered myself a huge fan. I always thought of them as more of a political band and the age of 15, I didn’t want to think too much when it came to listening to music.

The first song I heard from The Joshua Tree was and still is my favorite, Where The Streets Have No Name. The song was played in rotation on every pop radio station and on MTV, too. I remember watching the videos every hour on the hour. The coolest thing about the video is that it was recorded live on top of a store in southern California. MTV helped take The Joshua Tree and the videos that followed to a whole new level. Because of that the album The Joshua Tree was a global, number one, Billboard sensation.

There was no denying the change in the band’s musical status. They went from playing in theaters to sold-out stadiums and touring worldwide. U2 had captured the hearts of millions of people, and mine was one of those hearts.

Getting tickets to U2 was about as difficult as getting tickets to Michael Jackson, and I’m so not kidding. The closest I remember them being near Omaha were in Kansas City, and well I was 15 with a paper route, and no drivers license. Going to Kansas City was like going to the moon, a billion miles away. As the albums would come so would the tours, and as I got older, strange as it may sound like the concerts got more difficult to go too. I was becoming an adult, with a job and a child to take care, which made a concert again, a million miles away. However, I never lost hope that someday I would get that chance. In the meantime, there were plenty of new album releases to enjoy.

Part 2. I applied for a job at Bellevue University in Bellevue, Ne. in 2009 about three weeks before the show. I had intended to let my interviewer know that I would need two days off to go to this concert, that I had purchased the ticket over six months ago. However, when she started mentioning the benefits, I would have and one of them being a free college for my kids and not just at BU but at several other colleges, including the one my daughter was currently attending. I suddenly had a sick feeling in my stomach, and a wave of terrible depression hit me hard. As I went about my brand-new job, I tried to get up the courage to say something to my boss and each time I thought I had met that courage, I got a case of the “what if's."