*The Ozone and The Hangover* 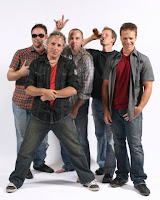 Ever been to the Ozone? Ever seen Hi-Fi Hangover? This is Penny Pepperstein and I want to tell you how I got to experience both last night. The Ozone is a premiere live music venue attached to Anthony’s Steakhouse on 72nd and F Streets. With an amazing new Terrazzo dance floor, lifted center stage, a cozy fireplace and soft lighting, this lounge packs a full house with live music six nights a week. I arrived early and wiggled my way through an already busy Ozone, and I noticed the smoky mirrors that gave the room a classy, upscale look. Diane, one of the several bartenders, smiled and listed off several drinks assuring me of a fully stocked bar. She hooked me up with a bubble gum tasting drink that had two kinds of UV Vodka and cranberry juice and was the perfect cocktail for sipping. Just as I made my way back to the table Hi-Fi Hangover took the stage by storm. Starting the night off with a hard rockin’ rendition of Van Halen’s Panama, lead singer Rob Hill had the energy and the edgy voice that got the crowd up and dancing right away. Just as I was getting comfortable with the idea that I was in the midst of a Gen X cover band, Hi-Fi Hangover shook things up by not only switching lead singers to Dana Hancock, but also throwing in some newer music by Kings of Leon and Nickelback. Brad Dienstbier was their smooth bass player, and did a few vocals himself along with former bandmate from Grand Theft Girlfriend, drummer Paul Weaklend. The two had impeccable timing and kept the songs sounding like the originals. Bringing all things 80’s and donning his shades with amazing style, keyboardist Jonathan Friedman topped off the perfect sound of Hi-Fi Hangover, an incredible cover band. With a variety of songs, everyone had a favorite they would get up and move too, and some never left the floor. They had everyone at the Ozone dancing, singing or at least tapping a foot to songs they knew and remembered. There was a diverse crowd of people. Couples, singles and even a ladies night out, and they were all getting their fix of an evening of fun music and tasty drinks. When I headed out, I left a still jumping, active group of people dancing and drinking the night away. On the way home I was still humming tunes I had not heard in a while as well as ones I heard on the radio earlier that day. This is Penny signing off and telling you to make your way to the dance floor, get your groove on with Hi-Fi Hangover and tell Diane at the bar of the Ozone to get you one of her favorite drinks...see you there!

Posted 31st May 2017 by Penny Pepperstein