"The Boys Are Back In Town" 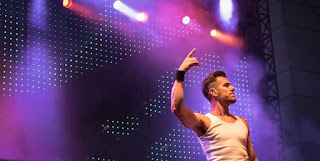 There are more musicians who hail from Omaha, Ne than one might think. If you were lucky enough to have been raised here you might already know. Either way those that grew up in Omaha are always proud of the stars who did too. For me, Omaha music is pride and here are a few reasons why: Buddy Miles, singer-songwriter and a drummer with musicians such as Jimi Hendrix. Paul William singer-songwriter has a trail of successes that the list is just too long to list in one review. Last but not at all least, 311. The 311 boys took the stage near home Friday night June 30th 2017 at the Lincoln On The Streets in Lincoln, Nebraska. Let me first start off by saying that in all my 36 years of concert going, I have never seen a musician make a quick appearance on the sidewalk where fans are waiting for the doors to open. In my concert world, if you paid an ungodly amount of money to obtain a VIP pass, you might get backstage for a 10 second meet & greet with the artist. P-Nut, the bass player from 311, walked casually down the sidewalk of fans, some of them too shocked to react. The whole scene made me smile as I watched him work his way down the line, shaking everyone’s hand and making sure anyone who wanted a picture, got one. Lincoln On The Streets was on fire Friday night, and the ignition was 311. They jumped onto a stage with the Nebraska state capitol for a backdrop and started the night with the song “Perfect Mistake,” a new hit off their latest album “Mosaic.” Over 5,500 concert goers had their hands in the air bouncing to the beat and the rhythm of the song. Most of the songs they played were hits off of the band’s first five studio albums. With the reggae sound and Nick Hexum’s crooning style voice, the song “Amber” had the audience singing along. “Do You Right” a song from the album “Music” was an old favorite about lazy days and good times. Some fans even lifted a drink in agreement.  The list goes on with old songs blended with the newer music from the Mosaic album, such as “To Much To Think," “On aroll,” and the “The Night Is Young," reminding everyone that 311 can't be narrowed down to one sound or one genre. Rock, rap, reggae, punk and metal 311 has never been described as boring, there is just too much to choose from. The band took breaks and gave two solos. The bass man, P-Nut, the man from the sidewalk, surprised me with yet another first for me, a bass guitar solo. He jammed on his bass guitar as if he had three instruments in his hand and not just one. Break two started as a drummer solo, but the solo led way to a full band percussion and all five guys were in perfect synchronized motion! If you were even remotely bored at this concert after that, you need to check your pulse. Throughout the show, 311 thanked the “Big Red country” audience for their support and gave a surprising fact explaining their longevity working together, “So we’re out here on summer tour celebrating 27 years as a band.” Said Hexum. “We found out we are the fourth-longest-running original-member band in rock ’n’ roll today.” And as they say, the crowd goes wild. It was an amazing night and awesome to know that almost three decades later 311 gave yet, another reason to be proud and inspired by Omaha’s music scene.   311 band includes: Nick Hexum – vocals, guitar, keyboards, Doug "SA" Martinez - Ghostwolf - Vocals, Aaron "P-Nut" Wills - Ghostwolf - Bass, Chad Sexton - Drums and Percussion For more pictures: pennyrocksphotography.com This is Penny Pepperstein signing off! See you soon, see you there.