Styx And An Old Friend 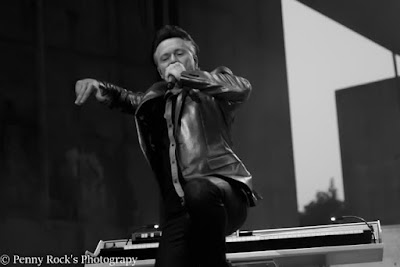 Styx was my first hard rock concert. In 1983 (age 11) the band was touring their latest LP Kilroy Is Here and my mom’s old boyfriend, Bruce, (RIP) bought two tickets, one for him and one for her. Lucky for me, my mom had to work that weekend, so I got to go. I was thrilled, overjoyed and freakin’ out as I stood in line at the Civic Auditorium waiting to head inside.

Pretty much all concerts where GA (general admission) at the “Civ” back then and Styx was no exception. When the doors opened we headed up the ramp to the first bowl and found seats. At 8pm a screen lowered and a short film started, the movie explained who Kilroy was and how the world was taken over by robots and electronics. Music was illegal. Kilroy broke free of a prison (using the robot uniform as a disguise) because he wouldn’t conform to what the world had become, the movie segued and the concert began… (IT WAS AWESOME!)

The concert world segued again for me last weekend when I saw Styx at the Pinewood Bowl in Lincoln, Ne. The band started the night with their new song “Gone, Gone, Gone” on the latest album, The Mission, released in June, 2016. The song was really good, but the next song on the set was an old favorite, “Blue Collar Man" the keyboard intro to this song always takes me back. It was playing on the radio when I was taking my driver’s test. I forgot to shut off my radio completely so when the song started, I turned it up. The man giving the test shook his head and turned the radio off. If you don’t know “Blue Collar Man”, go listen to it right now, and you will hear the song intro I mean. Go ahead…I’ll wait.

The stage set up had a small staircase on either side, that led down to the center of the stage and as each band member made their appearance from the top, the crowd went wild as they descended. James “JY” Young and Tommy Shaw looked like they did in the old days. A little shorter hair with more grey, a few wrinkles here and there but still lookin’ damn good for being in their sixties and rockin’ like they’re still in their twenties. Everyone in the crowd, younger and older, had their hands up and clapping in time to imitate songs such as “Too Much Time OnMy Hands”.

There was a tiny void in some of us older Styx fans as Dennis DeYoung had parted from the band in 1999. Lawrence Gowan, with his dark hair, grey striped at the temples and a vested, suit was just enough resemblance to DeYoung to appease that tiny void. However, his stellar voice and classical piano skills, mixed with his charismatic charm was enough to stop the resemblance and give homage where homage was earned. When the song “Come Sail Away” ended the applause was almost deafening for his performance. Everyone had welcomed him into the Styx “fan” club Nebraska style.