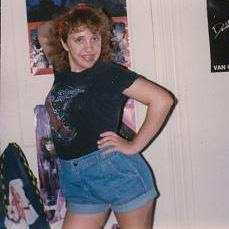 Rock and Roll. What makes us love it or hate it? I am Penny and I am going to tell you why I love it, what I love about it and what makes a musician pick up an instrument and what makes the rest of the world listen.

I grew up in the Omaha, Ne that's mentioned in two famous songs, "Turn The Page." by Bob Segar  and "American Band" by Grand Funk Railroad. My love of music started when I was probably around the age of four. Singing to songs like Hotel California in their entirety before I was even in school.

When I was young, my mom would take me to her friend's house with her and I would be found sitting near the turntable. An entire stereo set sitting on plywood and propped up by cinder blocks. I would flip through albums that were leaning against a speaker so big they could dwarf a large child or short adult. I would read as much as I could understand about every album and could understand about half or very little about what producers or engineers did. But absorbing what I could understand and by the time I was ten, I saved money from allowance and every dime would go to a new record or a new Rolling Stone magazine (then only about .75) and I would read it from cover to cover several times before the next weeks release.

I became a full-fledged, hands down, rock junkie by the time I was eleven. It was 1983 and the world was engulfed by Michael Jackson's Thriller and although I did love MJ, I was infatuated by the second biggest album of that year, Def Leppard's Pyromania. I fell head over heels in love with Steve Clark, who was the lead guitarist of Def Leppard, and the hottest member of the group. Steve Clark’s appeal for me was his constant look of sadness. I always wanted to reach through the tv, touch his face and wipe away the pain. The pain of a musician would always have my compassion from then on. The poet hiding behind his guitar, the painter of colors but without a brush and throwing himself to the world to be ripped apart by those that both love and hate him, why? Because he has too. It’s in the blood; even if it means going half mad or suicidal, that longing to be heard is so driven, that it consumes them.

Steve Clark would not the first on the list of musicians I knew in my heart were doomed to be another victim of that madness. The first time I ever laid eyes on Kurt Cobain, I knew that the fear was staked so deep into his heart that it was only a matter of time the world would be given to love his presence, while he was painstakingly hating it. The world still mourns him, why? Because we can all relate to his pain in some way.

It may seem that I have gotten off the beaten path explaining my love of music, when in all reality it is my love of the stories behind the music that drives me to listen. I get curious when I hear someone new; I want to know everything about their art, because as they are flyin’ high, their he