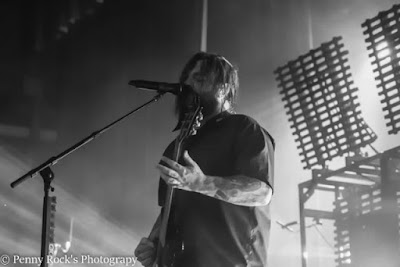 Well I am going begin at the end of the show and work my way to the beginning. Let me just get this out of the way and say I love Seether. Shaun Morgan’s hard core, gruff, angry sound to his voice gives his songs a pissed off feel to them. This is a guaranteed big reason as to why Seether is so loved. He screams out the words we want to scream out. When Shaun Morgan started the song "Gasoline", one of the band’s first big hits (2002 Disclaimer album) with the distorted first chords of his guitar had the audience worked up and ready to rock. Everything about this show started out so kick ass and then…the sound system had feedback, like, A LOT of feedback. Seether continued to play thru it, but the more Shaun would scream the worse it got. Long, loud screeches rang throughout the auditorium, leaving the audience to cover their ears to escape it. The fans didn’t seem to care much because as soon as the annoying sound subsided it was as if nothing happened and everyone continued the enjoyment of the song being played.This continued off and on throughout the performance during some of their biggest hits…it did get worked out and the show moved forward. As I worked my way thru the audience to find a place to see, I realized that as a shorter person in a standing room only Sokol Auditorium this had become a small feat. I wiggled my way upstairs to the balcony and did manage to find a little step to call my own.My favorite song “Country Song” began my devil horn, headbanging craziness along with the rest of the upper floor. Suddenly I realized I was still wearing my overall shorts I set out of the house in that morning. I had a busy Saturday and hadn’t gone home to change into my black jeans and concert t-shirt. You know the standard attire for the going to a Seether concert. But I digress, I was still wearing my light denim overalls with little hearts and stars and stripes embroidered on the front pocket. I quickly scanned the area for gawkers and I noticed that everyone was, well…old. Wait, wait before you turn off this post let me explain.When I listen to Seether no matter what year or how new the album is I always think of myself as the older one in the room/car/concert. I think this because in 2002 when Disclaimer was released I was 30 years old, in 2007 when my daughter was a teenager and listened to Seether, I was 35. I felt like the oldest Seether fan on the planet. That is, until Saturday night. Everyone was my age, some were little older and there were a few that were younger but every one of them was in that moment with Seether and without an age group. I suddenly felt very comfortable again and me and my overalls continued the head banging ritual that is hard ass rock.Next in the lineup going backwards, is Letters From The Fire. Alexa Kabazie with her long wild aqua colored hair that she happily threw around when emphasizing a pivotal moment in the song when the entire band would do the same in unison. This became contagious as the audience too began to follow the band’s lead