My Evening With Sick Puppies 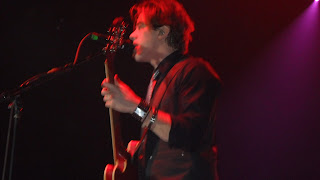 I initially saw Sick Puppies at the Qwest Center in Omaha when they were one of the opening acts for Nickelback’s Dark Horse tour in May of this year (2010). They were the first band to take the stage that night, and I was completely blown away. Until that night, I had only heard one song titled “Your Going Down” and not much else. “Holy shit” I kept saying over and over, like I had discovered them in an unknown bar instead of an 18,000 seat auditorium. I was awestruck. Although I was truly impressed by all the band members, what stuck in my mind most about that performance was the tiny lady bassist who kept doing a full-on head bang as she hung on tight with a bass guitar that was almost bigger than her. Fast-forward to November, I hear on The River radio station that Sick Puppies is performing in Omaha. A small venue (ok maybe not small but a hell of a lot smaller than the Qwest) and in my mind an approachable venue called the Sokol Auditorium. I email the band manager and explain who I am. He forwards my email on to the Press Agent and I am pretty sure the interview is in the bag. I am here to tell you my friends; nothing is ever in the bag, and sometimes that is a good thing. I may be a rock and roll geek, but I still have a lot to learn. The concert sold out in eight short days and was moved to a bigger venue across the river into the Council Bluffs, Mid America Center. With this, change came about two supporting bands, Emphatic and Shaman’s Harvest. Given a photo pass and permission to do a review, I was a tad disappointed not to get an interview, but I gratefully accepted my opportunity and ran with it.

The night of the concert, I am told to stand by a door at promptly 9:30. I arrive 15 minutes early to see two camera men standing with equipment I am sure is well over a few grand if not more. I stand at a distance with my puny Samsung camera that I am leasing from ACE Rent to Own and bow my head in shame. I avoid eye contact and hide my tiny camera in my pocket. When the escort arrives to walk us backstage I lift my head and remember why I am here. This is not about having the best pictures in the world. God knows I am no photographer. This is not even about having the best review in the world, again I am positive there are much better writers out there. This is about me. I and my readers and the best damn reviews I can write. I’m Penny Pepperstein, the girl who writes from her soul about something she loves with her heart.

I walk down the long corridor to the legendary backstage and chat briefly with my new photographing companions. A slow smile stretched across my face as I see the closeness of the stage; I listen to the instructions of our escort. “Stay clear of the Mosher’s and be careful of Security trying to pull them over the guard” she told us. “You can take pictures here for the first three songs, then you have to