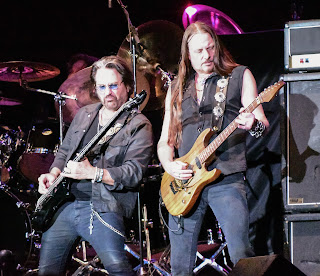 Penny Pepperstein Have I got your attention? Awesome!  No, I did not lose my virginity to anyone tonight but this was a night of firsts. This was my first big concert opportunity to write a review and take photos. This was my first time seeing Winger, Kansas and my first time in The Ralston Arena. Hence…you get it.  This is a two part review as I wanted to give each band their own Spotlight. Let me start off the first half of the show with a band that will most definitely, age me. Winger was the quintessential 80’s metal hair band and the 80’s is my generation of music and…hair. Yes, I had a crush on Kip Winger, along with every other 80’s rocker chick had back in the day (did I just say that out loud?). Kip has aged well. The long, wild hair has been replaced with shorter wild hair, blue tinted eye glasses and stubble facial hair. Some things are classics.  Being an adult now, with my pen tucked behind my ear and a camera in my hand, I told myself I was not going swoon when Winger hit the stage. I was going to stay objective, I was going be professional and take sensational pictures. However, when the band walked on the stage, 30 years melted away and for a moment I was 15 again. When the riff of the second song “Easy Come Easy Go” started, all the girls of “my” generation stood up and danced, danced as if it were 1987. Those first two rows didn’t sit down until the show was over. Kip Winger played a black “Jackson” bass guitar most of the evening. Winger took us all down memory lane and the fact is, their music was just as mastered now, as it was back then. Well, maybe a little more polished as the years had brought them to perfection. Winger is now made up of the following:  Reb Beach- The guitarist of many other hair bands, including his own, soloed himself into an ovation on more than one occasion tonight. Reb is the Co-founder and lead guitarist of Winger and still sporting that long, albeit not as curly hair as he did in the beginning of his career.  Rod Morgenstein – drums & percussion. Paul Taylor-keyboards & rhythm guitar. Donnie Wayne Smith- Little bit of everything.  Winger finished the night’s performance with the beloved song “Seventeen”. The audience was dancing and singing along, reliving those days of being seventeen, at a concert and loving the music.  Thank you for an awesome show! Come back again, soon!  And just incase you missed this awesome show or just miss hearing the songs. Here is the set list performed at the Ralston Arena you to listen too. http://www.setlist.fm/setlist/winger/2017/ralston-arena-