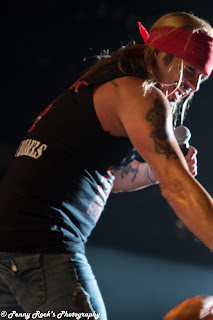 By Penny Pepperstein Five bands, people! Count ‘em. Firehouse, Lita Ford, Warrant, Dokken and Mr. Bret Michaels. This was a night of first for me. First multi-band event, as in more than two or three. First time seeing Bret Michaels, first time being on stage in front of 4000 people. How many times can I be a virgin? Uh, apparently quite a few. Yay me! So, I am going to do a thing I like to do once in awhile and that is tell the review, chronologically in reverse. I must start backwards because Bret Michaels was the showman to see, last night. Surprised? Not even. Bret and the band started with a former Poison hit “Talk Dirty To Me”, the girls went crazy and the men had the devil horns blazing. Yep it was 1987 all over at the MAC Sunday night! Sporting a solid red bandana, a black t-shirt with the “Bret Michaels Band” logo and a faded pair of jeans. He strutted, ran and flirted up and down the runway. With his 5-star smile, Bret pointed and made everyone feel apart of what he was singing. As if he might be telling you personally to “talk dirty to him”. As the first three songs went on he invited the photographers to join him on stage. At first, I looked around to see who he was talking about. Where were these photographers? As Bret continued to encourage us by waving us onto the stage, I was perfectly aware there was no way I was going to jump onto a 5’ stage. I mean I could barely jump off a curb some days. So just as I was about to back out of the pit and just not attempt to embarrass myself, two stage crew members came over to help me up and a security guard arrived to give me the fireman’s boost. I was up and now looking out over a sea of some 5000 people. I suddenly felt very self-aware and had to force myself to stop shaking and get behind the lens and do what I set out to do. And indeed, I did. The band finished the song and I headed down the stage stairs…wait…stairs? Are you kidding me with the stairs? I could have taken the stairs up to the stage. But no. My rational decision making was interrupted by blue eyes, waving me up. The night continued to produce old songs from the Poison days and when Bret grabbed his red and white stripped hat from a stand and his acoustic guitar, the house lights got low and Bret sat down on a stool and start strumming. He chatted a bit and then went into his most beloved song “Every Rose Has Its Thorns.” Cell phones glowed and swayed as Michaels crooned his sorrow of forlorn love. It was AWESOME! I smiled and swayed too. The show ended with a Kiss cover of, “Rock and Roll ALL Night,” and as they say, the crowd went wild. As I bring Bret Michaels to a close I would like to thank him for allowing me the opportunity to come out of the pit and into the light. Photos from a stage was beyond cool, it was a thoughtful thing to do. Moving backwards on the lineup will be a personal favorite. Dokken hit the ground running lead by singer/songwriter Don Dokken wasting no time to lay out the hits. “Dream Warriors,” all of you 80’s Freddie fans know all about this song. I saw fans wearing shirts with “don’t fall asleep” printed on the back and rocked with the all that 80’s enthusiasm. “In My Dreams” began with that amazing harmony and it sounded as good now as it was back then. From what I could tell from the singing of other fans that I was not the only one that loved the song. The Dokken emblem glowed like a black light poster and was without-a-doubt the coolest backdrop of the night. Stepping back to the Warrant stage next and I must say this, I have never been a big Warrant fan. I will crank up the tunes a bit if I hear the innuendos of “Cherry Pie” or the melodic love song “Heaven” and I always sing along too. But I never bought any recordings and I never went out of my way to see them. With that being said, I experienced Warrant and all of those songs in person and dude, that makes all the difference. The front man Robert Mason sounded scary close to the former Jani Lane when crooning “Heaven.” He made it fun and the fans enjoyed watching him jump around, twirling the mic stand just like the old days. Earlier in the night Miss Lita Ford kicked some old school ass when she rocked her long, blonde hair and red guitar screaming out Cherry Bomb just as crazy good as she did with the Runaways. As Lita talked about life and yesteryear's she recalls a song she wrote in 1991 for her mom who was dying of cancer titled, Lisa. She sang those sweet words of pain about how her mom was the only one who really knew her. Lita Ford continued her path of rock n roll entertainment, I remembered the first video I saw of her was, “Close My Eyes” with Ozzy. Lita was so tiny and