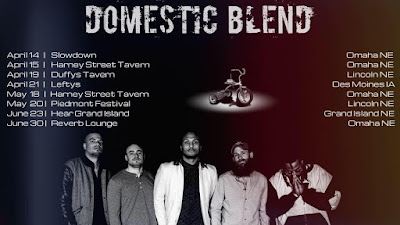 Hey, Penny here! Welcome back to Harney Street Tavern. I had such a good time last night that I had to go back again tonight. The band on the menu tonight had one of the more original names I had heard in awhile, Domestic Blend. 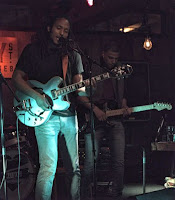 Domestic Blend is an original band with numerous genres of music. Reggae/soul/r&b and oh yes my fave, rock. Reggae and soul seem to be their home base, making everyone bounce their heads easily to the music. "Talk About It"  had a mature, adult contemporary feel that snuggling up close on the dance floor became an obsession. I just don't think my friend would have been to keen on that. Talk About It is a definite hit and should be on the air all across the globe (not even kidding). Brady's smooth as silk voice had everyone feeling relaxed and easy. A quick switch into rock was surprise and a treat to the senses. Add those beautiful eyes and dreads and you can sum Brady up in two words Yum-my. Not lying. Music and looks just screams a star.

Matt Jones, the bassist, was my favorite rock star of the night. He was, what I call, "gettin' down on it". Fully bearded and a ball cap, Matt became a character, one that had to be watched, listened and 'gettin' down on it' along with him. A bassist who loves the music of his own instrument is what makes a fan love him. Total entertainment.

Brandon on the drums, Sebastian on guitar and Nz-back up harmony as well as rap. These guys made the music happen, I mean they had me so captured in it I hoped the songs would never end.

I had a few minor complaints but nothing that will make it the end of the world for this band. The show was to start at 9 almost an hour later we were still waiting. This did give more show goers a chance to arrive and get their drinks. Later into the show one of the band members, NZ showed up a few songs into the set. This was a little confusing if you had never seen the band before and had no idea who he was. Again, no biggie because when he began singing harmony with Brady the confusion was gone. Just one more minor quirk and I will shut up, I was disappointed when they took a break after only a few songs and had already been late getting started. Oh, I definitely understand that musicians need to break, I just wasn't sure if their song list needed to be stretched out more or if they were having technical difficulties either way I did end up leaving during this break.

No worries readers, I will be going back to see Domestic Blend again and next time you need to join me. Above are the dates of their tour, pick one (Omaha or Lincoln) and give me a shout. I will definitely meet you there!

This is Penny signing out! See you soon, see you there. PS Always tip your bartender/server